On one night in January, volunteers canvassed the City to count the number of people experiencing homelessness. The PIT Count attempts to capture anyone who is visibly homeless in San Francisco, both in shelters and on the streets.

1. Young people account for about one in every five people experiencing homelessness locally.

This was true in 2015, and it remains true in 2017. The PIT Count shows that 1,363 out of 7,499 people experiencing homelessness in San Francisco are unaccompanied young people ages 24 and under. 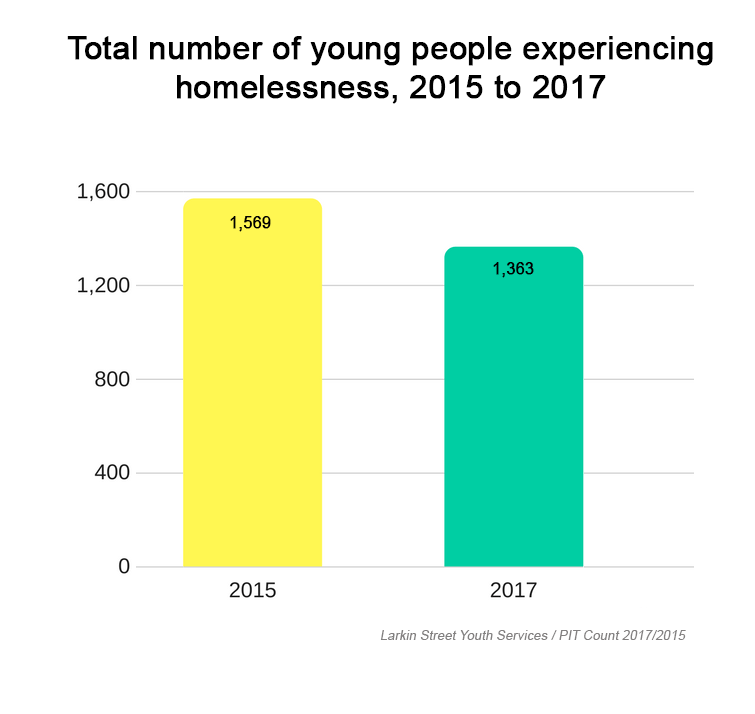 3. This decrease in youth homelessness occurred during a time of increased investment by the City.

4. There are more youth experiencing homelessness than were counted.

The PIT Count is a snapshot of homelessness on a single night in January, but doesn’t capture people who cycle in and out of homelessness during the rest of the year. Approximately 2,500 young people access Larkin Street’s services over the course of a year – 83% more youth than the PIT Count captures.

There were 1,363 youth living, literally, on the streets of our city on a cold night last January, as well as their uncounted brothers and sisters.

They are also our brothers and sisters. We cannot rest until they have a safe place to rest at night, and nourishing food, an education and self-sustaining work.

Please join in this critical effort. It will take all of us to end youth homelessness.

Our youth are counting on your support.